Types of Degrees Communication & Media Studies Majors Are Getting

The following table lists how many communication and media studies graduations there were in 2018-2019 for each degree level. 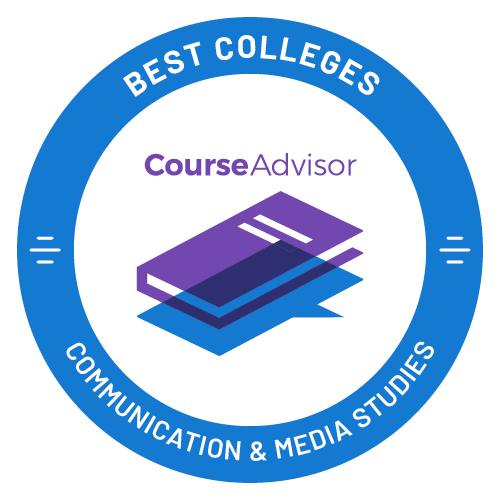 People with careers related to communications were asked what knowledge areas, skills, and abilities were important for their jobs. They weighted these areas on a scale of 1 to 5 with 5 being the highest.

According to O*NET survey takers, a major in communications should prepare you for careers in which you will need to be knowledgeable in the following areas: 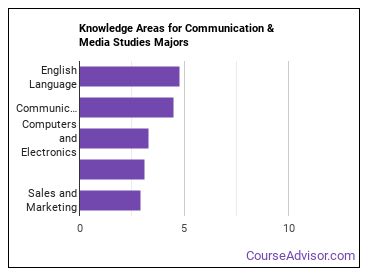 A major in communications prepares you for careers in which the following skill-sets are crucial: 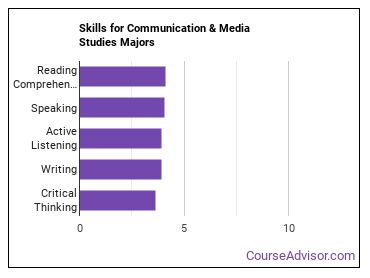 Some of the most crucial abilities to master while a communications student include the following: 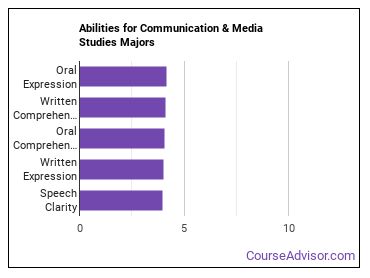 What Can You Do With a Communication & Media Studies Major?

Below is a list of occupations associated with communications:

Who Is Getting a Bachelor’s Degree in Communication & Media Studies?

55,113 Bachelor's Degrees Annually
65% Percent Women
36% Percent Racial-Ethnic Minorities*
This is one of the most frequently chosen undergraduate majors. It is the 6th most popular in the country with 55,113 students graduating with a bachelor’s in communications in 2019. The major attracts more women than men. About 65% of the recent graduates in this field are female.

At the countrywide level, the racial-ethnic distribution of communications majors is as follows: 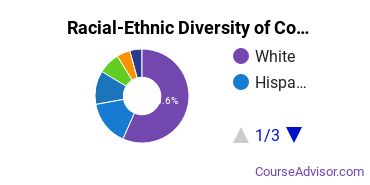 Students from other countries are interested in Communications, too. About 4.0% of those with this major are international students. The most popular countries for students from outside the country are:

How Much Do Communication & Media Studies Majors Make?

The median starting salary of students who graduated in 2015-2017 with a bachelor’s degree in communications was $31,700 per year. These stats come from the U.S. Department of Education. During this timeframe, most salaries fell between $28,150 (25th percentile) and $35,000 (75th percentile). 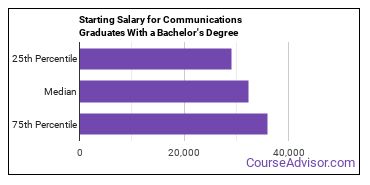 It’s important to note that just because the people reporting these salaries have a degree in communications, it does not mean that they are working in a job related to their degree.

Communications majors often go into careers where salaries can range from $51,630 to $73,090 (25th to 75th percentile). This range includes all degree levels, so you may expect those with a more advanced degree to make more while those with less advanced degrees will typically make less.

Some careers associated with communications require an advanced degree while some may not even require a bachelor’s. Whatever the case may be, pursuing more education usually means that more career options will be available to you.

How much schooling do you really need to compete in today’s job market? People currently working in careers related to communications have obtained the following education levels. 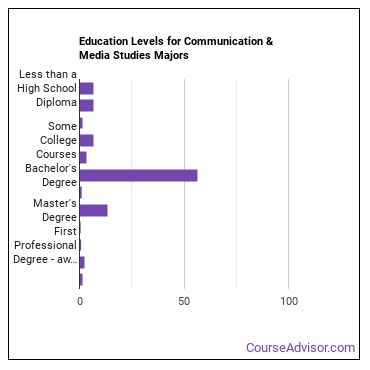 In 2018-2019, 1,408 schools offered a communications program of some type. The following table lists the number of programs by degree level, along with how many schools offered online courses in the field.

Is a Degree in Communication & Media Studies Worth It?

The median salary for a communications grad is $68,440 per year. This is based on the weighted average of the most common careers associated with the major.

This is 72% more than the average salary for an individual holding a high school degree. This adds up to a gain of about $570,800 after 20 years! 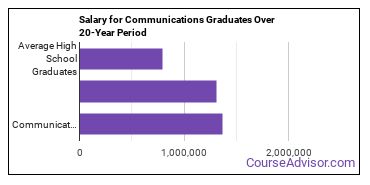 You may also be interested in one of the following majors related to communications.