Liberal arts general studies is a major that typically falls into the Liberal Arts & Humanities category.

There are 2,217 programs available throughout the country that offer an associate’s degree in liberal arts, 1,479 that offer a bachelor’s degree, and 243 that offer a master’s degree. There are also at least 24 schools in the nation where you can get your doctorate degree in the field.

Who Is Getting a Liberal Arts Degree?

Liberal arts general studies is the 10th most popular college major in the country. In 2017, roughly 45,100 students graduated with a bachelor’s degree in the field. This major is dominated by women with about 64.2% of recent graduates being female.

At the countrywide level, the racial distribution of liberal arts majors is as follows: 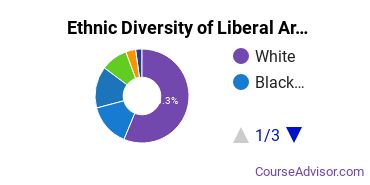 Americans aren’t the only ones with an interest in liberal arts. About 2.2% of those graduating in 2017 were international students. The most popular countries sending liberal arts majors to the U.S. are China, South Korea and Canada.

What Can You Do With a Liberal Arts Major?

Below is a list of occupations associated with liberal arts:

There are 1,479 colleges that offer a bachelor’s degree in liberal arts general studies, with 296 of them offering at least some courses online.

Is a Liberal Arts General Studies Major Worth It?

The median salary for a liberal arts grad is $77,000 per year. This is based on the weighted average of the most common careers associated with the major.

This is 98% more than the average salary for an individual holding a high school degree. This adds up to a gain of about $761,800 after 20 years! 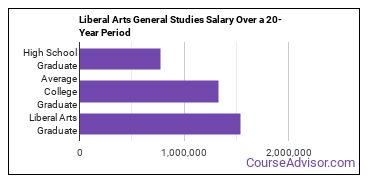