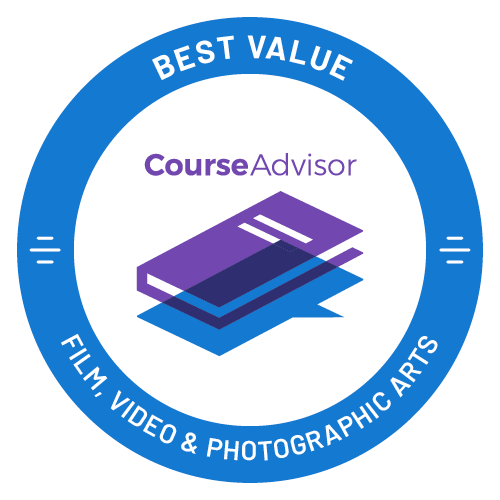 With 89 degrees and certificates handed out in 2020-2021, film, video and photographic arts is the #81 most popular major in District of Columbia.

There are so many programs in today's world that it can tough to figure out which one is the right one for you. Along with traditional schools that require in-person attendence, you can attend one of many reputable online schools. Some programs even offer a hybrid experience. Alternatively, you may choose a trade school that prepares you to enter the workforce with knowledge in a specific field.

To help you arm yourself with the information you need to make your decision, Course Advisor has developed this Best Value Film, Video & Photographic Arts Bachelor's Degree Schools in District of Columbia ranking.

This ranking is not just a list of inexpensive schools. We also consider each school's quality, since we believe a low-quality school may not be a 'bargain' at any price. Specifically, our score for quality is discounted by the published tuition and fees charged by the given college. This gives the cost per unit of quality for each college. The more quality your dollar buys, the better the value.

Check out the film bachelor's degree programs at this school if you want to get the best value for your educational dollar.

Our analysis found American University to be the best value school for film, video and photographic arts students who want to pursue a bachelor’s degree in District of Columbia. The American University is a fairly large private not-for-profit school located in the large city of Washington.

In addition to its best value ranking, and one of the reasons why the school is on the list, The American University is ranked #3 for overall quality for film in District of Columbia.

Explore all the Best Value Film, Video & Photographic Arts Schools in the Middle Atlantic Area or other specific states within that region.

Film, Video & Photographic Arts is one of 10 different types of programs to choose from.

Most Popular Majors Related to Film